I was watching Back To The Future with Fox the other day, and impressing / annoying him with my ability to say all the lines, verbatim, a split-second before they’re said on-screen (“Stella! Another one of these damn kids jumped in fronta my car!”).

I’ve seen it about 6,214 times, because I grew up in Hong Kong, where television was incredibly, astonishingly bad. So bad that there was only one kids’ TV show, a no-budget piece of trash called Megaquiz (Gemma trivia: I was on the first ever episode).

So if we had something on video, I watched it to death.

At school, we bartered tapes of TV shows sent by cousins living in normal countries like they were gold dust. Saved By The Bell, Saturday Night Live, Beverly Hills 90210, Blossom… I watched those tapes so often I knew how long to press fastforward on the remote to skip each individual commercial break perfectly.

My sister and I were allowed to rent one movie a week each. And then we’d watch it non-goddamn-stop. And because the choice at the video store was not only outdated but deeply limited, we borrowed the same movies. Again and again. And again. And again. And… well, you get it.

An aside (what, you thought I’d write a blog post without an aside? Have we just met, or what?): when I was about 10 my mother picked a video for us and accidentally came back with a lovely movie about a lady mechanic looking for love. TOMBOY. It was soft porn. I kid you not. My mother will want me to point out that she realised during the opening shower scene that it wasn’t a jolly romcom and turned it off. (Between you and me, it was like 15 minutes after that that she realised.) This is the cover of Tomboy. In fairness, it was an easy mistake to make.

So, apart from Tomboy, these are the films that will always make me think of my childhood. And as a little killing-time-on-a-Friday present from me to you, all the original trailers. 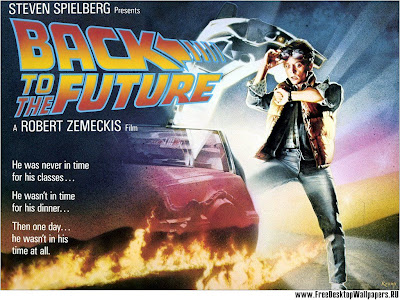 BACK TO THE FUTURE

As mentioned, one of the most perfect films of all time. Can still quote every line. Will watch entire thing whenever it is on. Man, I love Michael J Fox, he’s so great.

My sister and her best friend Jackie really, really, really loved Michael J Fox. Not as much as they loved Val Kilmer, which brings me to - 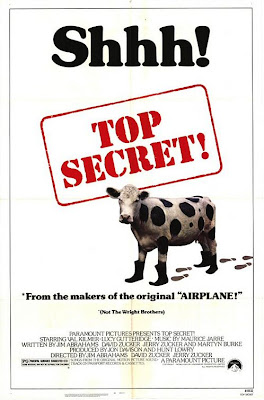 This is a great goddamn film. If you haven’t seen it, find it and watch it. It’s hilarious.

Also known as Night On The Town. Check it out:

Lamest. Poster. Ever. And shit copywriting. ‘After she finished with the crazy gangsters… cheating boyfriends… car chases… wild parties… climbing skyscrapers… staying alive was just part of the fun of… A Night On The Town’. Grow a brain, nameless copywriter from the past! The verb ‘climbing’ doesn’t fit, in fact, the entire sentence sucks ass. Also: why is there a picture of Brenda with the rat / kitten with the line ‘car chases’? So many things annoy me about this poster. And yes, I’m a pain in the ass when it comes to copywriting. I fight the urge to take out a red pen and correct bad copy everywhere I go. 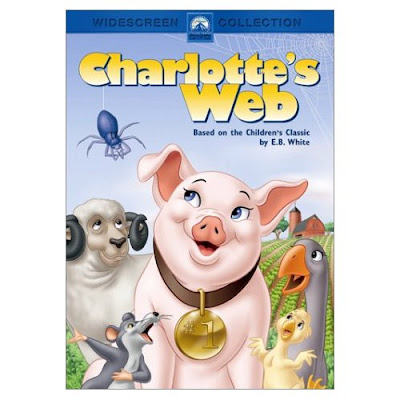 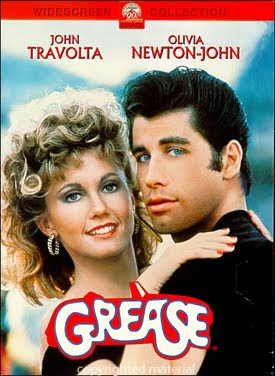 Every girl I know would probably name Grease as their No.1 childhood movie. It’s not our fault: it’s the law. And it’s in the Bible. (It is.) (Maybe.) It’s just one of those girl things, like everyone wanting to be Claudia in the Babysitter’s Club and making up extended dance routines and one-act plays and forcing their mother and sister to watch them – oh wait, that one was just me? Okay. Anyway, I can still close my eyes and play Grease in my head, word-for-word. You probably can too. We all can. Like I said, it’s the law. 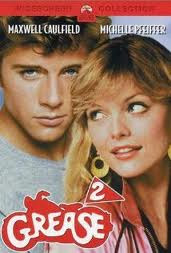 As an extra present, because I can’t resist: the Reproduction song…

…And the We’re Gonna Score Tonight song. Because IT. IS. AWESOME. 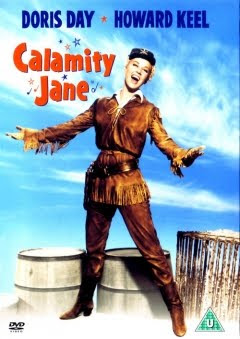 Yeah, I don’t know why either, but this was a major Burgess childhood movie. Includes the song ‘A Woman’s Touch’, with the immortal line: “A woman and a whiskbroom can accomplish so darn much!”. We embraced it without irony. We were just nuts for Doris Day. Full admission: these days, I’m not Little Miss Musicals (My friends: Gemma! We’re all seeing Rent / Joseph And His Technicolour Dreamcoat / Cabaret! Wanna come? Me: No freaking way. Friends: YOU HAVE NO SOUL). But when I was little, you could place me in front of anything with a long-dead MGM starlet and a jaunty dance routine and I was transfixed. I was basically a very short gay man with a blonde bowl cut. 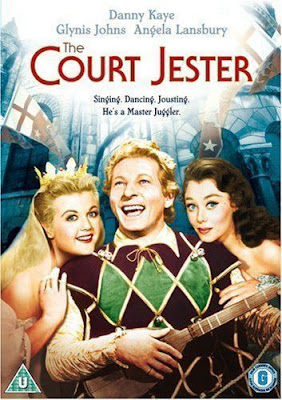 I give you Danny Kaye: the Adam Sandler of his generation. And, allegedly, Laurence Olivier’s luvah. 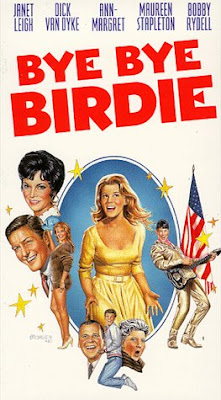 This is such a great movie! You should totally find it and watch it. Like all musicals, it goes a bit nutso-slash-boring in the middle, with far too many long songs and dance routines instead of oh, I don’t know, plot / character development, but the first hour rocks. Interesting fact: the man who voiced Templeton the rat in Charlotte’s Web plays the father in this. (Okay, that wasn’t that interesting. Let’s move on.)

Also just for my sister: The Telephone Song. (“HUGO AND KIM?”) 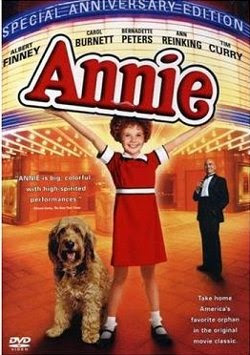 Unlike most little girls, I didn’t want to be Annie. I wanted to be one of the nameless blond girls with their hair in braids who can do handless cartwheels in the Hard Knock Life song. Yes, I aimed low. I was also such a scaredy-cat that I never watched the helicopter-bridge scene. I’d hide and read Anne Of Green Gables or Malory Towers or something till I was sure it was over. As a result I am still not sure what happens in that scene. I think it’s something to do with the Sikh dude’s turban. 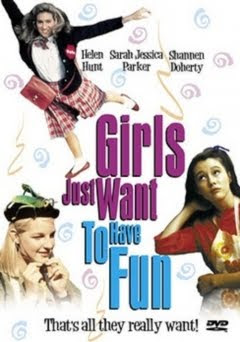 This movies pops into my head a lot, ie, when someone asks me ‘Do you have change for a twenty?’ and I say ‘Gosh, I don’t have anything smaller than a fifty!’ and then they look at me like I’m an asshole.

Again, made me wish I could do cartwheels. It just looks like such a cool thing to do, ya know? 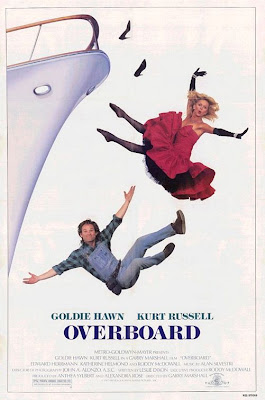 Fact: Overboard was created to make kids obsess about it. Four kids having a crazy childhood? A reverse Cinderella story: the princess gets saved by the pauper? Mini golf?! COME ON! It’s also goddamn hilarious, ie, ‘a falsetto child?’ And the fact that she keeps calling one of the kids Roy. And the video cover had some seriously awesome liquidy stuff in the plastic wrapper so that made it even cooler. 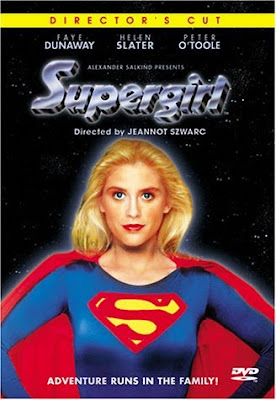 Man, this is one cheap-ass looking film, it must have cost about a buck to make. I presume Faye Dunaway dumped her agent immediately after it came out. But anyway, I thought it was amazing. The chick went on to star in Secret of My Success with MJF and Ruthless People with Judge Reinhold, Bette Midler and Danny DeVito. 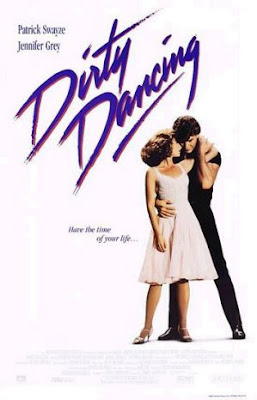 Like Grease, a sleepover classic. I distinctly remember being at a sleepover and when Johnny tells the old cougar lady that he can’t teach her how to dance, a very precocious nine-year-old turned to the rest of us and said crisply: “That means he doesn’t want to fuck her anymore.” 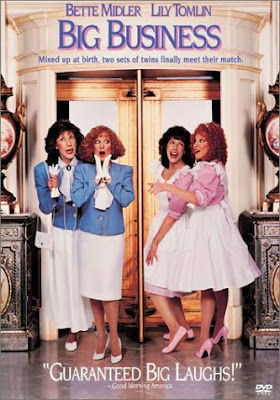 I once won a pub quiz at university when the tiebeater question started ‘born in Hawaii in 1947′ and I screamed ‘BETTE MIDLER!’ My street cred was HIGH after that, my friends. HIGH. I only stopped loving Bette Midler when I saw Beaches, which, even as a child, I realised was fucking lame. Big Business features two sets of identical twins separated at birth and reunited in NYC as adults! The jinx are so high! But I can’t find a trailer, dudes. Sorry. 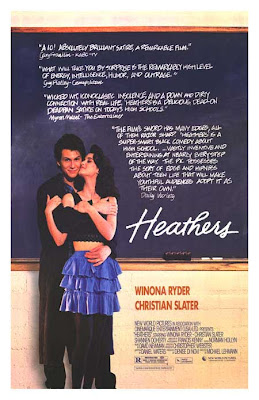 This movie made me feel far cooler than I was. Also set me up for a mini-Winona obsession with repeated watching of Mermaids, Reality Bites, etc. I adored Winona. Then I grew weary of her. As did everyone. I also loved Christian Slater so much that I spent a long time training myself to raise one eyebrow. I combed Tiger Beat and Teen Beat and every other teen rag I could get my hands on and cut out photos of him, no matter how small. There is a photo somewhere of me at 13 in front of my Homage To Christian Slater wall. No, I will not post it. (Okay, I will. But it’s in Hong Kong. You wanna talk my folks through how to scan a photo, you go for it.)

The trailer is, frankly, shit. So let’s watch this scene instead:

Even as I write this paragraph, I’m remembering She’s Out Of Control, My Stepmother Is An Alien, Teen Witch, Mr Mom, Mask, Foreign Exchange, My Secret Admirer, Bill & Ted’s Excellent Adventure… but seriously, I have to get back to the day job (writing your next favourite book, my friends). You would not believe how long I have spent on youtube cackling at these trailers and then clicking through to best-of clips… And in case you’re wondering: I didn’t really get into John Hughes films till I was well into my teens and they were already retro. But then I OBSESSED ABOUT THEM. TO THE POINT WHERE I SHOUT WHENEVER SOMEONE EVEN SAYS JOHN HUGHES. ARGH. SIXTEEN CANDLES. FERRIS BUELLER. SOME KIND OF WONDERFUL. WEIRD SCIENCE. SO GOOD.

Trini reminded me about The Princess Bride. 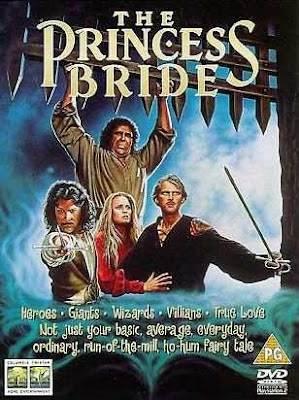 YIKES! How could I have forgotten The Princess Bride? Such a classic that we watched over and over and over again. Have you seen it recently? The set looks like it’s made of cardboard. It’s also a gorgeous and hilarious book, written by William Goldman, who was also the screenwriter. In case you are interested. I hearted Cary Elwes, who recently surfaced with a beard and about two lines of dialogue in No Strings Attached. What the hell, Hollywood. That is WESTLEY. Aka THE DREAD PIRATE ROBERTS. Give the guy a decent part why doncha.

5 thoughts on “On…. childhood movies”