It must be February 29 when not one but TWO links make you ache with laughter.

From The Onion: Female Friends Spent Raucous Night Validating The Living Shit Out Of Each Other

How did you decide what you wanted to be when you grew up?

I never knew. Well, actually, when I was four I wanted to be A Lady With A Baby. (Yah. Fight the good fight, little feminist.) Then I wanted to open a library in which all the books were written by me. (This seemed totally do-able.)

Then I didn’t spend a lot of time worrying about the future (though I really liked acting for a while in my teens and spent a lot of time imagining myself Being Discovered). And so, somehow, I ended up doing a triple degree in English, History and Theatre (if you consider turning up to the bare minimum of lectures, reading everything except for the books I was meant to be reading, and copying and cramming notes the night before the exam ‘doing’), and then a postgrad in Journalism, and boom, I landed with a thud into adulthood with a serious dislike for journalism and no fucking idea what to do.

Because how do you know? How can you possibly know? My mother was an English teacher, my father a lawyer, I was the eldest in the family. None of us had a clue what a 21-year-old with a fantastic education in Nothing Useful should do, or what jobs existed outside of the Teacher-Lawyer milieu. I had no skills, no experience beyond some abominable internships, no talent, no mentors, no clue. Eventually I got a terrible job with a terrible salary in a terrible company, and just plodded along, realising slowly that what I was probably best at, apart from having fun, was writing after all, and then realising that there was quite a lot of exciting jobs out there that involved words but weren’t journalism.

But God, it’s hard. Unless you’re really certain of yourself, and want to go into one of the traditional careers that everyone understands. (Accountant! Nurse! Marine Biologist!) (NB there are no marine biologists. I have a theory that whole career is a myth. I have never known anyone who is a marine biologist. Except Jacques Cousteau. And I’m pretty sure he’s dead. In fact, he may have been a myth, too.) For the rest of us, figuring out what you want to do, how you’re going to do it and – most importantly – how the hell you’re going to be good at it seems impossible.

When I really think about it, I have no idea how any of us survive that stage. Let alone go on to lead happy, fulfilling, successful lives. We’re like those little penguin eggs that get shuffled across the ice by their daddies. The odds seem stacked against us, but somehow, we all get through and live to spend another blizzard nestled together in a big penguin loveknot. (Or something like that. Whatever.)

I’m thinking about this, by the way, because I’m writing the book series of which you have head so much (and my friends, Advance Reading Copies shall be yours, I promise, as soon as I have my hot little hands on them – I will know soon when that will be…). And so I’m spending a lot of time remembering life at 21. And thanking fuck I’m not there anymore.

Perhaps even worse than 21 was 17. When I was an unexceptional, insecure, pretty-good-if-she-works-hard-student, trying to decide what to do at university. The careers counsellor my mother took me to gave me a bunch of aptitude tests and said I should be a social worker or a therapist of some kind. Thank God I didn’t take her brilliant advice. (I think that was because I allegedly have a ridiculously high empathy level, by the way; it has come up in other personality and aptitude tests. What that means, basically, is that if you cry in front of me, I will cry too. Seriously. I will sob. If someone is mean to you, I will want to hunt them down and kill them. Watching the news leaves me sleepless with worry, sad movies make me hysterical. It got worse, unsurprisingly, when Errol was a newborn: I lay in bed at night fretting tearfully about other unknown newborn babies who weren’t being loved or fed or cuddled enough. One morning I heard a baby crying outside our house, and wept inconsolably for about half an hour. Fox thought I’d completely lost my mind. So frankly, if I’d become a social worker I would probably have killed myself/someone else/been killed for being such an annoying dork by now.)

Anyway, a bachelor’s degree seemed like a good solution to buy me some time, and it was. I highly recommend it to anyone who isn’t sure what to do with their lives. You get to figure out who you are in the perfect gateway between school and real life: a tiny, comfortingly insular academic world that also gives you more freedom than you’ve ever had before, plus booze. You meet like-minded funsters, you read a lot, you laugh at all the self-loving pseudo-intellectuals spouting Kant and smoking rolled-up cigarettes, and you study things like Crime And Deviance In Britain (awesome course, I went to at least 40% of the lectures, a personal best). Have fun. 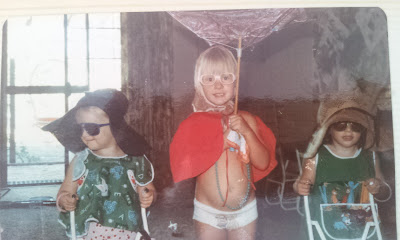 Ladies with babies. I am four and my sister and our friend Jane are about two and a half. Holy crap, this photo makes me laugh. Such total confidence. I think, from memory, that I am the grandma, and that’s why I don’t get a pram but I DO get the awesome accessories. 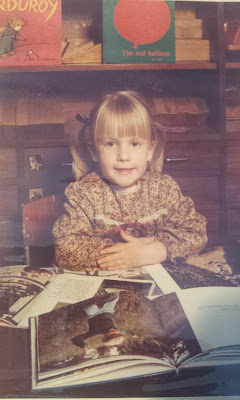 This is me at five, pretending to read some books, with an early example of the patented Gemma Burgess Uncomfortable Fake Smile. Man, that hairstyle was BAD. So was the dress. Laura Ashley and the Eighties have caused a lot of pain over the years. 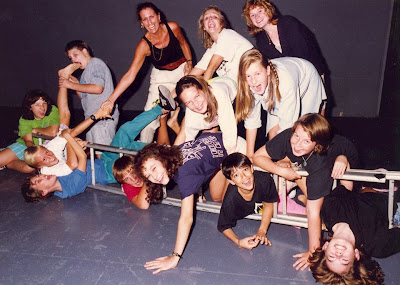 This is my teen acting troupe, Snakes And Ladders, in Hong Kong. Look at us, we’re a crazy/funky bunch of thespians! I am the blonde rocking the side braid and a variation on the Fake Smile: the Look How Much Fun I Am Having No Seriously For Serious This Isn’t A Set-Up Fake Smile.

I was going to write Sh*t Fashion Girls Say, but then I was like, why the hell would I asterisk my own blog? I can say anything I like on this blog. SHIT. FUCK. WILLY.

Anyway, these made me laugh so hard I kept missing lines and had to rewatch them over and over again. Thought you might enjoy them.

The continuity of the bangs really makes the second one for me.

You know when you’ve got your iPod, and you’re walking around, and you pretend you’re in a movie and the song is your own personal soundtrack? No? Just me then.

These are my songs when I am trying to be all thoughtful and pensive and shit. You know, in a looking-out-the-bus-window-at-the-rain kind of mood.

Strange and Beautiful by Aqualung.

More Than This by Roxy Music.

Let It Rain by OK GO. (This is not the official video. For some reason they don’t seem to have made one. Jeez.)

Don’t Ask Me by INXS. 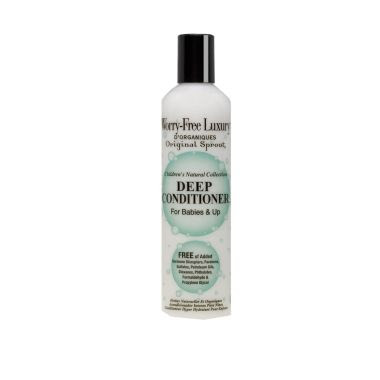 I’ve been testing beauty products for an article I’m writing for Tatler’s May issue.

And I have to give you guys the early heads-up: this Original Sprout Deep Conditioner is THE BEST THING THAT HAS HAPPENED TO MY HAIR IN like four years.

My hair is blonde and damaged and brittle and unreliable. It’s kind of like a stripper, I guess. It may also have daddy issues and a boyfriend called Big Tony. But that’s not the point right now.

The point is: if your hair is a needy victim like mine, try this. It’s amazing. My hair feels and looks silky, smooth, supple and strong. (Allegedly it’s for babies, but Errol is a baldy and, based on Fox and my early childhood, will probably be a baldy till he’s about four. So I’m totally stealing it.)

You can buy it here with free international delivery. 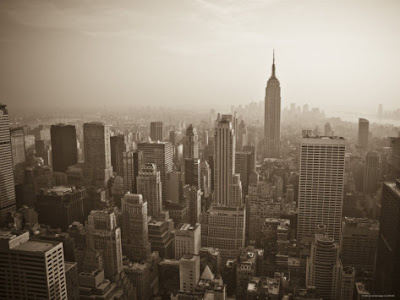 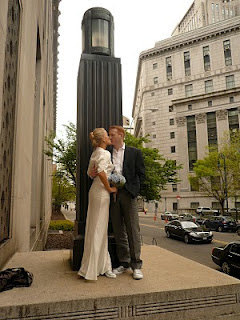