Clearly no one NEEDS a $95 candle.

But if you find yourself, as I did recently, with a gift card for a place where you just didn’t want anything else, but you had to spend the damn thing, OR if your significant other is looking for something to get you for Valentine’s Day, then this is the answer. 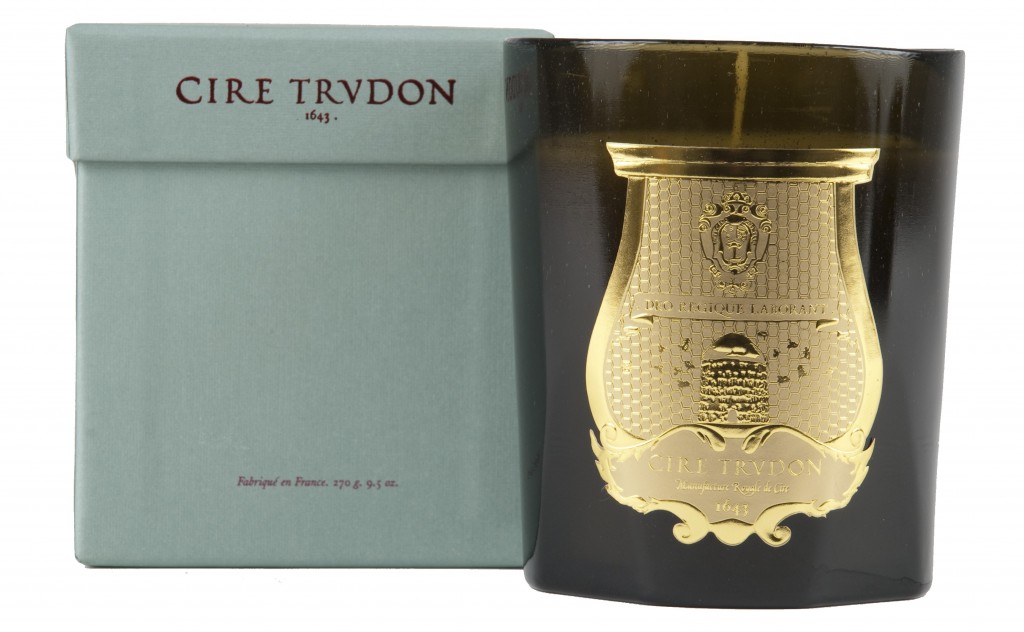 This is the ad copy.

Inspired by the elaborate parquetry of Château de Versailles’s famous Hall of Mirrors, this regal perfume radiates vapours of wax, candelabra and palace. A sumptuous trail of incense weaves through a tapestry of coniferous trees, cut with solar rays of citrus.

I bet the copywriter high-fived himself after getting away with that shit.

Ignore the copy. It smells amazing. Green and sharp, but not like being punched in the face by a fistful of mulch. Powdery, but not old ladyish. Clean and soapy, but none of that nasty muguet. It’s just SO GOOD. It will make you happy.

I love Cire Trudon Candles. I’ve been faithful to the Ernesto candle for years, and was on my way to get another one with my little gift card when I sniffed Solis Rex and dropped Ernesto like drunk girlfriend on New Years Eve. Cire Trudon candles last for about a year (way, way longer than Diptyque), burning one for an hour will make your whole house smell divine all day, and after they’re all used up, you can use them for your make-up brushes, or pens on your desk, or whatever blows your skirt up.

You can buy it at Lucky Scent or John Lewis in the UK.

An old favorite. There’s no video to watch, so just turn it up, close your eyes and listen, toots.

This morning I realized that I check Instagram before I check my email.

For me, it’s WILD. I’ve been a pretty half-assed social media person since the start. I like my thoughts to stay in my head, and if they come out, to be fully-formed and directed a particular audience, usually my husband (the poor bastard). If they’re really funny or interesting, I put them in a book or a movie or a TV show, or write them in a notebook so I can use them some day in a book or movie or a TV show.

And then all my other thoughts – most of my thoughts, let’s face it – are not worth saving or sharing. Ranting in my head about the number of emails I get from retailers with the wrong it’s/its in the title is boring, even to ME. Venting publicly about how bad something is makes me feel sad, because someone put a lot of love into that thing, even if that love was wildly misplaced. So… that doesn’t leave much to talk about. You know?

I don’t really do Facebook, never have, never will. I have a profile on there, but I check it about once every six months. And when I do check it, I am overwhelmed by a sort of nihilistic ennui about humanity. I am not alone in this. Teenagers know.

I think Facebook was originally kind of like finding a new bar when you’re in college and you’re like, I LOVE THIS BAR! THIS IS THE BEST! EVERYONE IS AWESOME HERE! COME PARTY WITH ME! And all your friends came and they were being hilarious and it was great. Then suddenly that dork from your International Relations tutorial came along which was annoying but it’s a free country, and then that idiot who bullied you in high school but you can deal with it and it’s kind of nice to see how fat she is now even if she keeps showing you pictures of her awful baby’s new teeth, and then your ex came in which is super-annoying because how dare he still exist, and then some tequila girls came in and gave you free shots and you were like well that’s more like it, but then a really dorky Kind Bar promotional guy came in and tried to give you free power bars and made bad jokes and said things like ‘WHASSUUUP’ which was just pathetic, and then finally some stranger came over and tried to sell you Sealy Posturpedic mattresses, just because you were talking to your friend about the squeaky bed when you got laid last night and he was eavesdropping and figured you might be interested, and you were like FUCK THIS BAR SUCKS I AM SO OVER ALL YOU PEOPLE.

Twitter used to be fun, but somehow isn’t anymore. Somehow it’s just as chaotic and boring as Facebook.

Instagram, however, is adorable.  Like a thousand little windows into a thousand little universes. I don’t follow celebrities because it makes me feel creepy. And I don’t hate-follow anyone, although I know that is a thing. I just follow people I like.

I have a private feed on Instagram, though I accept just about anyone who asks, as long as their profile doesn’t seem bananas. I realize that it’s probably a total false sense of security, but at least this way, no one truly crazy (or, um, the guys I used to date) can just wander through the internet and see photos of my life. Anyway. What about you?

I introduced my mother to the delights of PARTY DOWN the other night, and OH, how she loved it. I remember posting about it before but just in case you missed it…

Watch Party Down. It’s on iTunes or (free!) Hulu.

Just in case you forgot what this video looked like.