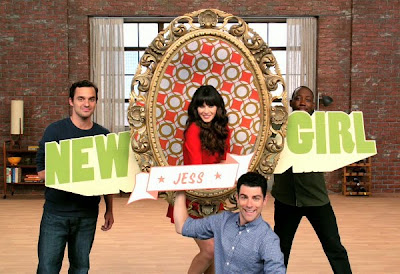 Because Jess is a Real Girl.

Unlike every other female twentysomethingish ensemble sitcom character that I can think of, she’s not simply the Hippie, the Ditz, the Princess, the Nerd, the Tomboy, the Slut, the Bitch, or the Neurotic.

She’s just a Real Girl. She’s sometimes a bit of all those things, and she has a soupcon of hipster kook, but she’s also silly and quick and warm and vulnerable and confident. In other words, she is complex and she surprises you. She’s a Real Girl.

And best of all, she’s funny. Very very funny.

Now, of course, all sitcoms rely on archetypes for laughter and conflict, and I get that. So does chicklit, after all. But it just feels so good to have a heroine like this. Someone I can actually identify with and genuinely like. A female character who gets to be funny, intentionally and not intentionally. For once, the joke isn’t always on her.

The archtypical female sitcom favourite, and up till now, the character most likely to not have the joke always on her, is the Cool Girl With Balls.

The Cool Girl With Balls is the character that Rachel from Friends turned into after being a Princess for the first few seasons, the kind that the girls in How I Met Your Mother compete to be, the kind that the dumb blonde on The Big Bang Theory is turning into, in fact, the kind that all alpha female sitcom characters evolve into eventually. A sort of watered down Suck-My-Dick-Sexy-GI-Jane type with a penchant for put-downs as punchlines.

But here’s the thing: Cool Girl With Balls is competitive, cold, insecure and no fun at all. You wouldn’t want to be her friend. Hell, she doesn’t make friends. Every woman I’ve ever known who pretends to be a Cool Girl With Balls is actually miserable and constantly wondering why she feels so sad and lonely. (Here’s a hint, sweetie: you’re acting like a bitch.)

New Girl knows all this, of course. In a brilliant middle finger to those sitcoms, the ultimate Cool Girl With Balls character turns up in New Girl, as the cold-as-ice-and-way-too-skinny-lawyer chick that Nick is dating. She refuses dessert, ‘doesn’t have a lot of female friends’, refuses to be warm or bond with Jess, ridicules her girliness as though it was an act, in summary: acts like a Cool Girl With Balls. It’s so brilliant I kept breaking into cheers.

Here’s Jess’s speech from the end of that episode, defending herself to the Cool Girl With Balls. It’s perfection.

I break for birds. I rock a lot of polka dots. I have touched glitter in the last 24 hours. I spend my entire day talking to children, and I find it fundamentally strange that you’re not a dessert person. That’s just weird and it freaks me out. And I’m sorry I don’t talk like Murphy Brown, and I hate your pant suit and I wish it had ribbons on it to make it slightly cute. And that doesn’t mean I’m not smart and tough and strong.

Join me in a fist pump, my friends. God, I love that speech.

Because I am a girl, too. I like lipstick and manicures and romantic comedies. I have a sewing kit with lace and pearl buttons in it. I can spend half an hour talking to my sister about eyebrows. Flowers make me happy. Sometimes I skip. I don’t like kittens and I don’t like polka dots and I hated The Notebook, but that’s because I’m not a cliche of a girly girl. I’m just me. I am what I am and I like what I like.

I know a lot of girls like me, and you know what? We’re fucking awesome.

I would like to buy Liz Meriwether – the showrunner and head writer for New Girl – a drink.