This post isn’t about writing. It’s about make-up. So if you don’t love make-up, please scroll down. There’s lots about reading and writing in other posts.

I just swapped something on Make Up Alley.

As usual, I’m filled with a very happy glow. I LOVE Make Up Alley.

If you don’t know it, a-ha! You are in for a surprise. Thousands of makeup enthusiasts go on to review make-up items they love/hate/meh. For example, I’ve posted reviews for my HGs (MUA-speak for Holy Grail) like Benefit High Beam highlighter, Dior ShowLash mascara and MAC Cute blush, as well as for meh-items like MAC Bare Study Paintpot. (Don’t bother; Soft Ochre is way better and will keep your eyeshadow in place all the live-long day.)

Apart from being very diverting (the reviews range from highly professional, ie, “the foundation tends to oxidise…” to giddily girly, ie, “OMGF i have finally found it!!! THE PERFECT NON-DEAD PINKY-NUDE LIPSTICK!!!!” to plain hilarious, ie, “If I wanted to look green and chalky all day I would get drunk every night” or “this so-called illuminator is a glitterbomb of Hiroshima proportions”), it’s a great way of picking up application tips, as well as finding out, for example, if the new MAC Limited Edition colour is in fact just a facsimile of a shade from the permanent range, or if a new NARS blush is just a copy of a MAC blush for twice the price. I trust MUAers more than magazines, because – and this is, obviously, not shocking news for any of us – most beauty journalists write what the PR people want them to write.

And the site is great for swapping.

Here’s how it works: you join Make Up Alley and make a ‘Swap List’ of unwanted makeup items – that blush that never quite worked for you, the eyeshadow that won’t stick. Another MUAer will email to ask if you’d like to swap for something they’ve got, making sure that you know how much they’ve used it (ie, ‘x10 swiped’ means it’s been used lightly about 10 times). You both post your items, and that’s it. Every time you make a successful swap, you get a token, so the more tokens you have, the more people will swap with you, and so on and so on. I only swap once every few months. I’m pretty reactive and picky; plus if I really want something, I tend to buy it.

Some of my friends think it’s gross. I can see their point, which is why I only ever swap nearly-unused blushes and eyeshadows and only brands I know really well ie MAC and NARS. In this case, I swapped MAC Shimpagne (it was too dark for me) for MAC Solar White eyeshadow, which sounds interesting. I’ve barely used Shimpagne, she’s barely used Solar White.

Why do I do it? Reason one: because I love makeup. Yup. I do. I am a total girl. When I was five, I stole my mother’s lipsticks and slept with them under my pillow just because I loved them so damn much. My friends say things like ‘I was such a tomboy, always climbing trees’ and I’m perplexed. Why would you climb a tree when you could sew a new dress for your Cabbage Patch Kid? Writing stories, making up plays and dances, reading, drawing, sewing, knitting, baking: I was a pathetically unreconstructed child. Maybe I read Little Women too many times. I always wanted to be Amy but knew I was Beth. Sorry, back to the point.

Reason two: it’s free. No, I’m not exactly poor, but like most women, I probably spend hundreds, if not thousands of pounds a year on make up / creams / hair products, etc. Swapping is a great way of trying new and potentially risky colours for free (I would never have found MAC Bitter without swapping, and it’s awesome – electric yellowygreen, a tiny smidge gives a delicious edge to any taupe).

Have I ever been ripped off (or, to use the MUA-slang, ‘swaplifted’)? No. It does happen, apparently, but it never has to me.

And this is reason three, and the reason I probably keep swapping when, God knows, I don’t need the makeup: I just love the concept. You exchange girly, friendly emails with a total stranger; then you swap products through the mail, often with a nice little note and then you have a new colour to play with. It’s simple and warm-hearted and its success relies entirely on thousands of women being honest and generous. Like Twitter, it kind of makes me fall a little bit more in love with humanity. And yes, I know how retch-inducingly positive that sentence is. But I don’t care. So there. 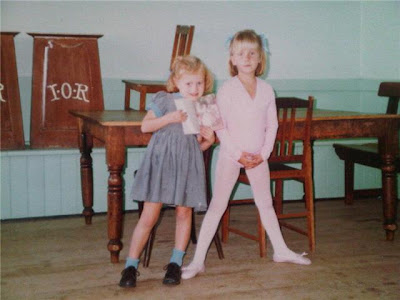 My sister and I, aged four and six. I’m the ballet dancer, she’s showing off her favourite book. See? Girly-girls. (She was always so much more adorable than me.) I have hilarious photos somewhere of us dressing up our dogs as babies and making them sit in prams, I’ll find them…

2 thoughts on “On Make Up Alley”