Since moving to NYC I’ve been lucky enough to meet a ricockulous number of interesting and lovely women, including Samantha Hahn. She’s a fashion illustrator and artist and all-round insanely talented person. She’s so talented, in fact, that if she wasn’t nice and funny too, I would probably be jealous. 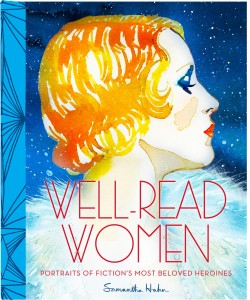 Her upcoming book is called WELL-READ WOMEN and it’s an absolute dream for everyone who loves to read: an illustrated compendium of some of the most-loved female characters in literature. When I heard about it, I nearly fell off the sofa with excitement.

There’s about 400 women I need to buy this for, especially ME. And even though it’s not out till August, Samantha just sent me a PDF of a few of the spreads – so here’s a sneak peek…

Daisy Buchanan from The Great Gatsby by F. Scott Fitzgerald. 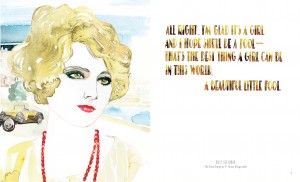 Esther Greenwood, from The Bell Jar by Sylvia Plath. 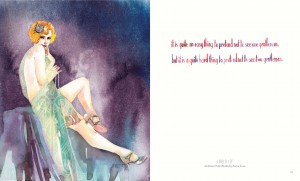 Holly Golightly from Breakfast At Tiffany’s by Truman Capote. 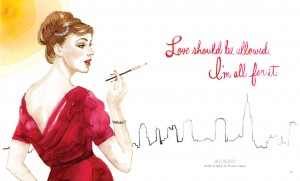 Word on the street is that this is going to sell out FAST – each book is a work of art, seriously, for serious – so if this is your bag, get pre-ordering, my loves… here in the US and here in the UK and as soon as The Book Depository sorts itself out and lists it, I’ll let you know…