THIS INCENSE IS INSANE.

Nippon Kodo Kayuragi Japanese Incense Sticks in Aloeswood. There are 40 sticks in this pack (and it comes with a little holder, too). Smells utterly delicious, lasts for hours and hours, and every time I walk into our apartment I think ‘omg that smells so damn good’. Not like the incense that the stoned girls used to have at college, all cumin and fake jasmine, ewwww. More like… I don’t know. Let me think.

Got it: it smells like Hong Kong. Not in a bad way. Not in the humid-cement-covered-in-urine-and-rotting-cabbage way (though I am genuinely quite partial to that smell, too). More in the walking-into-a-Hong-Kong-furniture-store way. It smells like sweet smoke and rice and shiny dark furniture. And I’m not sure what else. Aloeswood, clearly, whatever the fuh that is.

It just smells like I want my apartment to smell, forever.

It is my gift to everyone I know for the rest of the year. Having me to dinner? Have some incense. Helped me with a work thing? Voila. Invited me over and braided my hair while we watched Marvelous Mrs Maisel together? Light this on fire. You’ll thank me later. 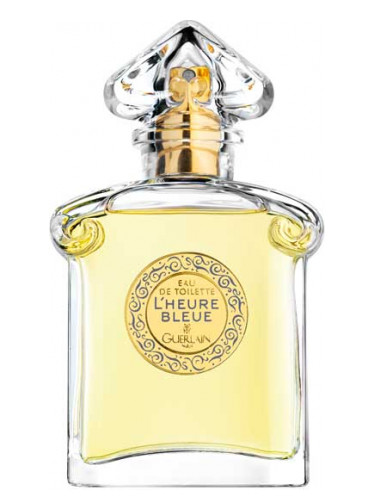 And on a frosty, already endless January, when I’m writing every day and slightly bored but also know that I have to push through the boredom in order to write something halfway decent, I wear L’Heure Bleue.

So let’s talk about it. L’Heure Bleue – meaning ‘the blue hour’, i.e., dusk – was launched by Guerlain in 1912. It probably doesn’t smell quite the same now as it did then. Many of the old ingredients are illegal now; we don’t slaughter muskrats and civet cats and whales anymore for their yummy olfactory charms, and frankly the world is the poorer for it. But it still smells divine. It’s slightly sweet (not cloying), musky (in a cool way, rather than warm) and has a delicious slow roundness to it, with a tiny hint of play doh, which sounds weird but oh man, it’s so good. When I wear it I think of warm living rooms and thin sunshine and dust. And sex. But not bite-me-on-the-neck-and-ravage-me sex, more sleepy afternoon sex. The kind you have in between hangover naps. (Assuming you don’t have small children, because if you do, obviously sex won’t be happening, instead you put on Peppa Pig and pass out on the floor next to the Lego, but even doing that kind of smells like L’Heure Bleue.)

L’Heure Bleue is not overpowering, but it lasts forever on your skin. If it helps you to imagine-smell the scent in your brain, the notes are listed as anise, bergamot, orange blossom, heliotrope, tuberose, carnation, violet, jasmine, Bulgarian rose, tonka bean, orris, benzoin, vanilla, musk. To me, it’s something to wear on quiet days, with big oversize sweaters and clean hair. (Yes, there are perfumes for dirty hair days. This is not it.) In bold, bright summer, it somehow becomes too heavy, in sparkly crisp December, it’s too cool. But in January it’s juuuust right.

You can find L’Heure Bleu just about anywhere. All those slightly seedy online perfume stores and Amazon have it for less than $50 (I did a lot of research once about whether those cheapie cheap perfume sites are bargains or fake, and the answer was ‘*probably* not fake’ which is good enough for me, and at least on Amazon you can return it if it’s fake), or you can buy the guaranteed real thing in a department store for three times that price, or you can hop over to Etsy and get a vintage one, that might have been stored badly and now smells like pee OR might have sat untouched in some nice lady’s vanity for the last 30 years and be the best thing you’ve ever, ever smelled in your damn life. You can choose between the Eau de Toilette (lovely but won’t last as long), the Eau de Parfum (this is the one I have) or the Parfum (ridiculously expensive but probably orgasmic). Finding the right bottle for the right price will give you a joyous, slaying-a-woolly-mammoth euphoria, trust me. Happy hunting.

I realized something recently.

I don’t mean corny stupid rubbish. I mean sex and fighting, basically. And shouting and laughing and crying, and more sex. That’s the core of all the best shows, right?

You know those dramas where they put in a “high concept” murder/horror/medical edge, to supposedly add stakes? I usually don’t care much about that part of the show. I care about the people. If they feel real, and the way they talk and relate to each other feels real, I’ll watch that show forever. (Especially if they’re surprising and original and brash and feminist.) If not, I just seriously don’t give a fuh who the murderer is. And you know those wacky sitcoms that are just a bunch of punchlines strung together and could basically be cartoons and you wouldn’t notice the difference? They also leave me cold, I can’t even remember a single plot line. But give me a sitcom with real people and sex and emotion and I’m a devotee for life. I watch GLOW for the characters and the writing. Not the lady wrestling. You’re The Worst, Friends From College, Crashing, Catastrophe… all of them have an element of soap. That’s why I watch them. Punchlines are cheap. Emotion is hard.

I don’t mean that I only like relationship drama. I still watch The Americans for the spy stories. I watch Billions for the financial intrigue. I loved the legal plot lines in The Good Wife and The Good Fight. But did I watch Scandal for the political stuff? Hell, no. I watched it for the insanely passionate speeches. (Try this.) And I wasn’t watching This Is Us last year to find out how Jack died, I was watching it to see what Sterling K Brown would do this week, and how it would make me cry. (Seriously you guys, I am starting a company that will send out support animals to help people watch This Is Us.)  I sometimes turn on This Is Us thinking to myself ‘right then, chaps, who’s making the grand gesture or big speech this time?’ – but I still get incredibly emotionally involved in it EVERY WEEK. Because the characters and the writing is so damn great. That’s good soap.

I think everyone likes soap, and they’re just in denial, because they don’t think it’s cool.

I shopped a soapy spec pilot last year. It’s a character-driven family drama, called Relativity. And when I was meeting with people about it, everyone said ‘we LOVE but can we add some kind of procedural element/murder/court case to it?’ And I – being the newbie, and also being a people-pleaser – said, ‘um, sure, I can try that, I can try anything, whatever you like!’ But eventually, I sold it to Universal, and they – because they are brilliant – decided not to add anymore layers to it. They liked the relationships, they liked that it was a smart soap, and thought it was stronger as a show about complicated grown-up families. (They asked me to add more ‘gut-wrenching’ moments to it, so I did, and now even I find the pilot hard to read without crying. Laaaaaaame.) Maybe someone will make it, maybe someone won’t… Cross your fingers for me. I also sold a pitch to ABC Network, and just sent in the final pilot script. It’s called Mavericks, and it’s a – yes – soapy drama about start-ups, set in a We Work type communal workspace. It has a darker edge – it’s about what people will do in order to succeed. Again, cross your fingers… Anyway, enough about me, let’s talk about the reason for this post:

I LOVE Riverdale. Season One was brilliant, Season Two is better. Are you watching it? It’s basically an Archie comic, updated to modern day, with a tedious-but-okay-fine-whatever murder-mystery element, filmed with a really heavy grey-blue Instagram filter.

And it WORKS! Sometimes the story goes off on crazy tangents, and it irritates me that the town is progressive enough to accept gay teen boys yet the shocking shame of a pregnant teenage girl is enough to break a family apart, but apart from that, I love it.

PS At the end of an episode in S1, they played nouvelle vague cover of Wang Chung’s Dance Hall Days. That alone deserves a watch, no?

PPS Obviously, I am partial to a hot ginger – I married one – but seriously for real Archie is pretty damn hot. 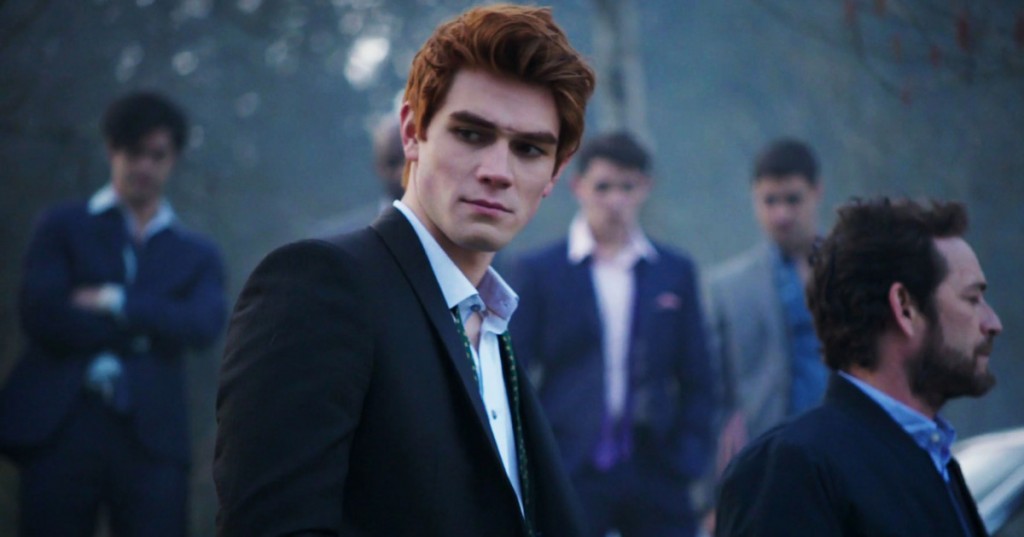 Okay, so I’m just going to close my eyes and hold my nose and jump into the water: yes, last year was a challenge in a few key ways. I didn’t talk about it here or anywhere else, I just threw myself into writing and my tiny sons and happy things like movies and TV shows and books and music. (And beauty products, natch.) I didn’t want to focus on sadness, or burden other people with it. I would always – pathetically – much rather laugh and feel good and make other people laugh and feel good, too. I even remember trying to comfort near-strangers at my own father’s funeral. (“Oh, it’s okay, thank you, it’s fine, no no, it’s fine, don’t worry, how are YOU?” etc. Who does that? I mean, seriously.) And having a job where I have to make up shit for a living – where I have to think like another person in another life – is the best for avoiding bad feelings. Who’s sad? Not me! I’m pretending to not be me. All good here.

Anyway. Then my friend asked me if I’d write something for her post about what 2017 taught people, and we deliberated a bit because I’m boringly private and tend to keep social media stuff to personality not personal… and then I thought, well, fuck it. This has sucked, if someone else is going through something similar, I want her to know she’s not alone. So, person out there who is having a hard time: you are not alone.

I’m glad I did. I’ve received so many emails from lovely women offering support and empathy. Thank you, lovely women.

Watched the pilot of this show on Hulu the other night and laughed an inordinate amount. Highly recommend.