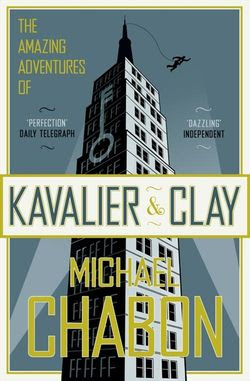 The Amazing Adventures of Kavalier and Clay.

I feel like this book was the reason I learned to read.

It’s Thursday. It’s cold. And this song is cheering me up.

Since The Dating Detox came out five weeks ago, I’ve received some lovely emails from readers. Most of them are just a little hello with a note about what they thought about the book, some of them are long and funny dating-related diatribes, some are asking for postcards or suggesting bastard names. I reply to every single one (though one girl replied that she was impressed I replied – I promise, there is no Gem-bot, this is all me, dude). And thus we come to my story. It’s about remorse.

Remorse, when you’re alone and hungover, is the dictionary definition of ‘unbearable’. (It is so. Look it up. No, not in that dictionary. Okay, well you must not have the same dictionary as me so never mind, just keep reading.)

The scene: early one Sunday a few weeks ago. I was up early, editing Book Deux (I’ll have a title soon I promise and even a sneak peek), and trying to ignore Foxy’s little snuffled snores echoing through the house.

Naturally, I was procrastinating. I skipped down to get a coffee at the Grocer on Elgin, shuffled home, checked Topshop.com (they update it sometimes on Sundays, you know) and then, hurrah, up popped an email. A witty but clearly heartfelt e-moan of woe.

She’d been on a date the night before and woke gasping with horror at the realization that she had drunk a bit more than she’d intended… to the extent that she couldn’t remember most of the last hour of the date. She emailed me saying ‘arggggh advice please’. My first though: am I so transparently a drink-sozzled dating harpy that people with hangovers think of me before they even think of Nurofen, coffee and toast? – then I realised that what she really needed wasn’t advice on what to text him. She’s funny and clever (we’d been Tweeting for a few weeks; the girl gives good copy) and able to figure it out for herself. What she needed was reassurance; a warm soul-sustaining word-porridge of comfort that would destroy the searing hot fear-flame also known as ‘what was I like?’. And since it was early Sunday morning, I’m guessing she didn’t want to bother her friends yet but couldn’t bear to lie in bed with just her brain for company either. I understand that: it’s practically the reason I wrote The Dating Detox. My brain was really getting on my tits.

So she emailed, I replied, and she emailed again – and then I asked her permission to reprint my reply email here, in case anyone else ever needs their soul soothed. She said yes.

After all, every now and again everyone craves the reassurance that not only are you not the only person to ever feel the way you’re feeling, but that you won’t feel that way for long. You will be happier again, and sooner than you think. And we all need that reassurance in far more situations than just the once-a-year woe-gasm when the last thing we remember saying is ‘Shall I get another bottle?’. But that’s another post altogether. Anyway, here’s my email reply.

Oh no, remorse! I feel your pain.

I am so happy to offer balm for your wounded dating soul, and I recognise the urgent need for reassurance so I am replying immediatement. For a start, you weren’t as bad as you think, I guarantee it. Secondly, everyone does this once in a while – it’s God’s little way of making sure we don’t run out of anecdotes.

I definitely think texting your route two – honest/funny/endearing – is the answer. You can take control and be witty and cute, without admitting any embarrassment, and he’ll think, ‘ah, this girl is so cool’. Something like – and of course your own style of texual healing would be infinitely better, but just as a sample – ‘Aren’t I adorable when I’m accidentally hammered? Seriously. I should have my own TV show’ or ‘Drunk girls are the new black’. Don’t worry about the ‘im not usually like that…’ angle… He’ll find that out when he sees you again, which he totally will.

Proof: on my second date with Paul, we went to the Boisdale and drank whiskey and smoked cigars. I was so drunk from nerves/hunger that when we left and he offered to walk me home, rather than steer us towards my house in Pimlico (four minutes away) I made us walk the other way and we ended up in the middle of Belgravia. Paul says I was wavering all over the pavement and saying things like “Eaton Shquare? thish just doesnt make any shensh!”. Cringe. Anyway. And we’re getting hitched.

Am listening to myself dispense advice like cigarettes here and should probably caveat that I may not know everything and should potentially not be held up as a dating sage… But am very happy to offer reassurance. And God knows, I made a lot of mistakes.

I’m up early taptaptapping away on the edits for book two, but my stomach is a little jumpy. “Grey Goose on the rocks,” I opined last night at about midnight, “This shit is mother’s fucking milk to me, people. I’ll be up early typing while you’re all vomiting from the wine. You mark my words.”

I hope this helps? Drink tea. Eat anything you want. Go shopping. And log onto this www.textsfromlastnight.com – it will definitely make you feel better, I promise.

And by the way, the emailer is still seeing the man in question. So clearly she had nothing to worry about. Which is probably always the way when it comes to these things… 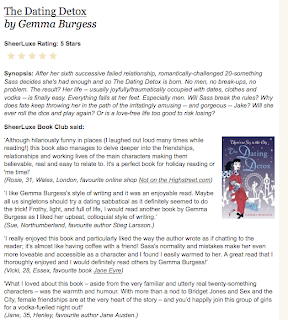 I’m not posting every time I have a review, I promise – but I LOVE this one so much I had to put it here. Sheer Luxe is THE online luxury shopping mecca, and you can trust it to give only Top Gun tips. (The best of the best, obviously.) It also has a brilliant book club. And the reviewers are clearly utterly lovely women. I’d like to take them out for a drink.