3. I have moved house 28 times in my life across four different countries. But I’ve been in London for almost 10 years. It’s the longest I’ve ever lived anywhere. The best thing about growing up all over the place is that I find it pretty easy to make friends. The worst is that I am always missing someone. Especially Bec and Sarah.
4. I failed French at university on lack of attendance. Don’t tell my Dad.
5. Failing French was particularly pathetic considering I went to a French school in Hong Kong. (I know that nothing in that sentence makes sense. Just roll with it.)
6. I giggle in my sleep. I think this sounds adorable, but apparently it’s very annoying.
7. I can say ‘what a beautiful baby!’ and ‘crazy white devil’ in Cantonese. Nothing else, which is also pathetic considering I mostly grew up in Hong Kong.
8. I met my boyfriend in a bar at 2am when his friend chatted up my friend. I wish it was a classier story.
9. I am marrying him in New York in April. I don’t like the word fiancé.
10. My favourite-ever copyline, ‘Love You Long Haul’, for a new long-haul flight, never got past the first hurdle: the uber-conservative account manager. Shame.
11. I can’t count. And I mean, really, I can’t. I’m severely mathematically challenged. Ask me to remember a number and seconds later, it’ll be gone from my brain. Bills are a mystery. Taxes are magic. The word ‘invoice’ makes me perspire.
12. When I turned 29, I quit my job, my house and my long-term boyfriend (who was a very nice guy who just wasn’t the right guy for me – the bastards were before him) in the same week and discovered that life was a lot easier and more fun than I was allowing it to be.
13. I have zero tolerance for judgmental or negative people. Or as I prefer to call them, ass-hats.
14. I love big cities. I want to marry them.
15. I believe everyone is happier in a mullet wig. Here’s a picture of my sister and I wearing mullet wigs. See how happy we are? 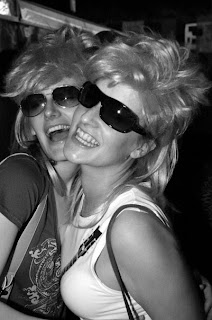