I’ve noticed that there are a lot of would-be authors out there waiting to get signed. And I thought I’d tell you exactly what I did – timeline, cover letters, absolutely everything, as you might find it useful.

If you’re just here to kill time, please scroll down. There was a post on drinking a few weeks ago that is probably a bit more entertaining.

January 2008: Sheared sacroiliac joint, whatever that is. Was unable to move without excruciating backpain for about three weeks, and my boyfriend was away, and so my sister came over a lot to do things way above and beyond the call of sisterly duty (on the first day she even helped me put knickers on, the poor thing. Apparently I am a nightmare patient, although I compared myself at the time to an adorable duckling with a clipped wing. Anyway.) We watched a lot of Entourage and read a lot of Jilly Cooper, and at some point had a conversation about how we wanted to read more genuinely silly, sharp, warm books about confident, normal, funny girls going through crises. And so one night when I couldn’t sleep, I began writing a thing I had in my head about a girl who wakes up after being dumped again, surrounded by fag packets. Anika said it made her laugh. I kept writing.

Jan- May 2008: Wrote a bit here and there ie every week or so I’d pull out the laptop for a taptaptap, usually when Anika asked ‘what is going to happen next?’. By May I had about seven or eight chapters together and my boyfriend and mother nagged me to send it out to agents. I knew no one in the publishing world, and it’s kind of embarrassing to ask people if they know anyone: ‘um, so I’m writing a novel..’. (Especially as a copywriter, because we’re all fucking writing novels.) So then I picked agents, totally at random, off the internet, chosen according to postcode (my reasoning being that anyone in W1 or WC1 was doing damn well) and sent in the first three chapters, printed and bound, plus a cover letter and synopsis. (Am sure it’s obvious to say here but – everything was proofed to within an inch of its life, printed on good paper, doublespaced, etc.) If you’d like to read my original cover letter, email me and I’ll send it to you.

June 2008 – nothing happens. My birthday is June 15, so my sister (who was then doing covers for Penguin) mocked up a pretend book cover, complete with review quotes on the back. (This is when it was still called The Dating Sabbatical.) She said that it is positive visualisation and ‘if you build it, they will come’ etc. I nodded hopefully and bit my lip. This is a copy of my positive-visualisation cover. 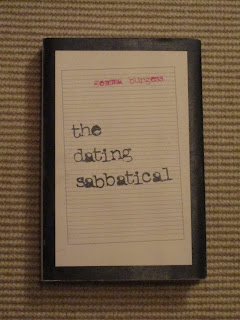 Early July 2008 – got a few rejections. Again if you’d like to read them, email me and I’ll send them to you. They were all standard form letters.

July 16, 2008 – phone call from Laura Longrigg at MBA asking to read the rest. Cue, jumping for joy, etc. (Blogged about this already so won’t repeat myself.) She asked for the rest of it. Immediately dropped everything and started writing. (By the way: my manuscript, being unsolicited, might never have been read at all had an intern who was at MBA for a few days not been assigned to read the slush pile. MBA gets hundreds of manuscript submissions a week. Fortunately for me, the intern read my manuscript and wrote a little report recommending it be looked at by Laura. I have a copy of the report and every time I look at it my stomach drops with what might have been. I never met that intern. I wish I had. If you are out there, please get in touch.)

Mid August, 2008 – Two other agents got in touch around now, but my heart was with MBA, and I sent in my final manuscript. It was about 65,000 words – ie, half the length it is now. (Silly freshman.) Laura rang to say she liked it and ‘more, please’. She was incredibly enthusiastic and encouraging about those 65,000 words, which spurred me on – I imagine many agents might have said ‘novels aren’t 65,000 words, you ninny’. She also gave me some specific feedback about she thought what worked and what didn’t.So, I immediately dropped everything and started writing again. Was also freelancing fulltime so gave up drinking entirely, which was tediously effective as I could survive on about five hours sleep. I lived my social life vicariously through book (why do you think they all drink / smoke so much?).

October, 2008 – Handed in second draft and really, the first ‘real’ draft. This one had longer subplots and a few extra plot twists and turns. Laura liked it, causing me to nearly pass out with happiness, and officially offered me a contract and started talking to various publishers. Sadly, our timing was off: the world had just financially combusted. I kept seeing articles about how it was The Worst Frankfurt Bookfair In The History Of Mankind, etc, and shouting WHY at the sky.

November 2008 – I had lunch with Cat Cobain, then editor at Headline and now at Transworld. She was very encouraging and gave me fantastic, thought-provoking advice. We talked books and plots and character development for two hours and I left thinking ‘maybe I can do this thing…’

December 2008 – February 2008 – very very quiet period when no one was offering a book deal for my poor little manuscript. Got a bit down at this point. Lots of staring into space pondering life. Tweaked book but was starting to hate it. Laura was, as ever, incredibly encouraging and supportive throughout all this…

May 2009– Harper Collins editor Keshini Naidoo sent a brilliant and stimulating document of thoughts and suggested additions – particularly (if you haven’t read the book, which I’m sure most people won’t have, just skip this paragraph as it will bore you): the addition of all the boyfriends by name/story; making Sass’s motivations much clearer so that going on a Dating Sabbatical is the only course of action; mentioning the Rules throughout the book so that the reader is constantly reminded of them; etc – basically, refining and sharpening the whole thing. Kesh also suggested I add more dating tips from Sass to Kate – and then my friends requested I add even more. And by the way, over the previous six months, about ten girlfriends had read it and made helpful comments (ie, from my most ladylike friend, “I don’t like the ‘I need to wee’” – someone else felt Kate was a bit cold, etc).

About feedback, by the way: seeing your book through someone else’s eyes is an immeasurable advantage. I’ve heard lots of people say that it must be hard to get criticism but it’s really not. (Perhaps after 10 years as a copywriter I’m used to it.) Try to be bulletproof about it. Everyone will have an opinion on your writing, guaranteed – you don’t have to agree with all of it, of course, or act on it, but the point is that it stimulates thought and that’s always a good thing. For example, if someone doesn’t see a character the way you see them, then you have to ask yourself why and go back and see how you can introduce the character better.

Feedback also inspires editing. I love editing. Sure, sometimes it hurts. If there’s a line, word, character or scene you love, killing them can be tough. But the result is just about always better. ‘Kill your babies’ is the saying (nasty, I know).

And one more thing about feedback / comments / suggestions: you might think ‘but x wouldn’t do that’ or ‘that would never happen’, and that’s cool too. No one can make you change your book in ways that you don’t want to – it’s a world you’ve created, after all, and no one knows it like you do. (By the way, if feedback is really nasty and unhelpful, then just flip it the bird and ignore it.)

July 2009 – I handed in the final-final-seriously-I’m-hanging-up-now-no-you-hang-up draft. It was only at this point that I named the main character. I’m not kidding. I’ve posted about how I named her a few weeks ago, so scroll down to find out. Then I started writing a screenplay based on the book, just to see if I could.

August- September 2009– Copy edits. Proofing. At this point, the control freak in me roared a mighty roar and I became obsessed with proofing and copyedits (which is things like, checking that street names are correct; making sure numbers / names / places are referred to consistently – difficult when, like me, you tend to change minor characters names based on your mood that day). This was possibly the most stressful period of the entire publication process. The publishers also recommended we change the name from The Dating Sabbatical to The Dating Detox around now. Plus, at this point my first effort at a second book drove itself into a ditch and wouldn’t get up. No amount of CPR would bring it back to life. September was a difficult month. I spent a lot of time lying prostate on the kitchen floor, wailing in the shower, etc.

October 2009 – I started a second second novel. Luckily I found an idea that made me laugh and am, at the moment that I’m typing this, half a chapter away from finishing. (This entire blog post is really one long procrastination effort.)

And here’s a fabulously brutal piece about how agents choose a book.

And read this from soup to nuts. It’s awesome and full of other author How I Did It stories.

3 thoughts on “On publication”