I have some good news for you.

Particularly if, like me, you have read Jilly Cooper so many times that you can recall entire passages verbatim.

I’m not alone in my Jilly obsession, of course. She and Helen Fielding are the ne-plus-ultras of British comic female-oriented fiction, the Top Guns, the best of the best.

And I’ve picked up many would-be hilarious rural romps over the years, sighed and discarded them within a hundred pages, as I recognised characters, plot turns and in one case a word-for-word character description lifted straight from Jilly. Lifting word-for-word from Jilly is veh cheeky and rather stupid, as that’s her MO: her copy is seriously crafted, fresh and effortless to read. Okay, back to the point.

So when I find a book that has all the delightful escapism I crave in a romp, then I have to share it.

It is called HEAVEN SCENT. By Sasha Wagstaff. 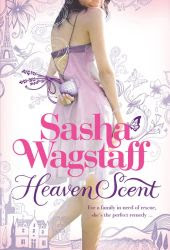 The setup: a gloriously wealthy and troubled French family own a huge-but-stagnating perfume house, and discover that their wayward cousin married an unknown English girl just before he died. Now she stands to inherit tens of millions and a stake in the family business – but who is she?

Can you imagine anything more delicious? I can’t. The South of France! Perfume! A family scandal! It’s classic escapism, pure and simple.

Since we’re on the subject of books (yet again… at one point this blog nearly turned into a book blog, so I’ve had to stop myself from posting about everything I read) I also just read – and enjoyed about a thousand times more than I thought I would – LA Candy by Lauren Conrad.

Now, admittedly, I loved The Hills and The City more than any grown woman ought to admit to herself, let alone her blog, but I had simply dismissed the book as crap without even glancing at it. Then a very smart girl I know told me that she and her equally smart friends all passed it back and forth, slightly obsessively. Now I understand why. It’s ricockulously moreish. I’ve already ordered the sequel, Sugar & Spice.

One thought on “On… Heaven Scent”