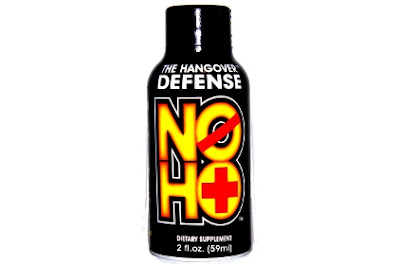 Do you live in Dublin? Or know someone who does?

If so, I have ace news for you: just go to South Anne Street today, or on Saturday 26th or Sunday 27th, and visit the NOHO pop-up store, say ‘Conor sent me’ and get 20% off the cost of NOHO!

What the hell is NOHO, you ask?

Now, full caveat: I haven’t tried it myself (preggers + nursing = booze-free 2011 for Gemgem) but Fox has, and it really does work. Normally, his hangovers render him bedridden for at least a day, groaning piteously, begging me for toast / water / coffee / the laptop / the papers / some cola bottle candies / a head massage / anything else his poisoned liver demands. But the morning after he tried NOHO, he sprang out of bed, chipper and ready to face the day. And the man was drinking martinis, wine, and G&Ts the night before. He’d come home at 1am, serenaded me with ‘Goodnight Sweetheart’ (yep, from Three Men And A Baby), and then snored like a dinosaur bear all night. He had no business being chipper. No business at all. When I am back in the drinking saddle again, I shall be on the NOHO bus faster than you can say ‘double vodka on the rocks’.

Anyway. Here’s the stuff you need to know: it’s a little shot bottle sold in packs of two, you take one before you go out, and one before you go to sleep. There’s no sugar, no caffeine, no crazy stimulants. Just the perfect combination of vitamins and nutrients (like Ginger Root Extract and Prickly Pear Extract) that help your body break down alcohol. And dudes, I’m pretty sure it’s the real deal. NOHO is the No.1 hangover solution in the US.

And now my brother-in-law Conor is bringing it to Ireland. For Conor, being hangover-free is every Irishman’s God-given right.

For the next six weeks NOHO will be available from a pop-up store on South Anne Street, just off Grafton Street. So swing in and say hello. It’s normally €5 for two bottles, but you can get it for €4 for the next three days just by saying ‘Conor sent me’ at the check out. And €4 is, after all, less than the cost of a drink in Dublin these days. So please, check it out, and then let me know if it works for you.

Conor has a cameo in The Dating Detox, by the way, as the smart-mouthed Irishman at the country house party. When he found out I was writing a book, he asked if he could be in it, and I thought: why the devil not? (When I tell people that, they tend to ask ‘why isn’t Foxy in it?’ and Fox replies something like ‘because I am both JAKE AND ROBERT! Rolled into ONE PERFECT SPECIMAN OF MANLINESS!’ And then I reply ‘sure you are dude, whatever gets you through the night’.)

2 thoughts on “On… just for Dubliners”